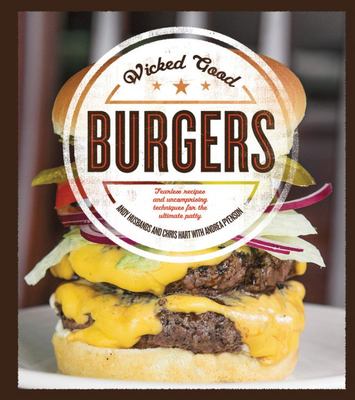 Wicked Good Burgers ain't your daddy's patty on a bun. The upstart Yankee team that revolutionized barbecue with their upset win at the Jack Daniel's World Championship Invitational turns their talents to burgers.

Wicked Good Burgers fearlessly incorporates new techniques, inspirations, and ingredients to take the burger to the next level - whether it's the Meatloaf Burger on Pretzel Bread with Cabernet Mustard or the Island Creek Burger with Oysters and homemade cocktail sauce.

You'll learn the art and science of freshly grinding meats - from beef to lamb to goat - for the ultimate juicy burger as well as cooking methods such as smoking, grilling, griddling, and sous vide that impart distinctive flavor.

ANDY HUSBANDS, the award-winning chef/owner of Tremont 647, has been enticing patrons with his adventurous American cuisine at the South End neighborhood restaurant and bar for well over a decade. A James Beard "Best Chef" semi-finalist, Andy competed in the sixth season of Fox Television Network's "Hells Kitchen" with Gordon Ramsay. CHRIS HART, winner of the Jack Daniel Invitational World Championship in 2009, has dominated the competition BBQ circuit for the past 10 years with his team, iQUE. The team was the first group of northerners in barbecue history to win a World Championship. Chris spends his days developing software, but his passion for cooking barbecue has him following the competition BBQ trail on weekends, pitting his talents against the best pitmasters in the U.S. In 2010, Chris cooked an elaborate barbecue tasting menu at the James Beard House in NYC. ANDREA PYENSON has been writing about food for more than a decade and enjoying it for a lot longer than that. Her writing about food and travel has appeared in The Boston Globe, edible Boston, edible Cape Cod, msn.com, oneforthetable.com, The Washington Post, and Fine Cooking, among others. Pyenson was associate editor of The Boston Globe Illustrated New England Seafood Cookbook and assistant editor of 52 Weeks Cheap Eats: Dining Deals in Greater Boston.